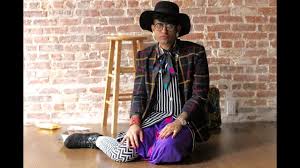 Alok Vaid-Menon’s eclectic style and poetic challenge to the gender binary have been internationally renowned.  They were recently the youngest recipient of the prestigious Live Works Performance Act Award granted to ten performance artists across the world.  In 2017 they released their inaugural poetry chapbook “Femme in Public”.  They have been featured on HBO, MTV, the Guardian, National Geographic, the New York Times, and the New Yorker and have presented their work at 400 venues in over 40 countries.